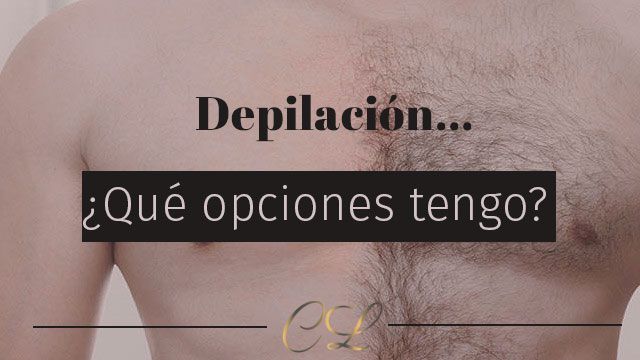 Male waxing in areas like Barcelona is fashionable and constantly growing. And we have seen how in the last 13 years the increase in the trend is remarkable. Men more consistently decide to wax.

There are many reasons to choose to wax, such as; hygiene or aesthetics at first, but today at least 88% of the men who have had a survey done say they have waxed in the last year with one of the methods that we will see later.

There are a large number of depilatory creams that are used to remove unwanted hair in some areas of the body, currently different methods of permanent hair removal have been implemented, such as laser hair removal.

As a general rule, men’s hair presents differences with respect to women’s.

These differences that we talk about are mainly:

When taking one method or another for hair removal, a number of things must be taken into account, such as: Pain, effectiveness, duration, frequency, along with cost.

In women, the wax removal method has always been well known, but now we will see how for men and beauty, there are other body services that can be useful.

Razor blades are the most universal method that has always been used by men and when it comes to hair removal it is also well known. With them, the most negative part is that we only remove the surface, but not reaching the root of the hair.

Advantages found in this method by those who use it

They are cheap, accessible, painless and very useful for facial hair.

They are not really useful for the removal of the hair that you can find on the body as they are not specifically prepared for the large surfaces we work with and densities. All this and in addition to being able to produce unnecessary cuts and irritations.

The hair is not permanently removed and the shaving operation must be carried out on a recurring basis, whether it is integral or not.

For this reason, we can see in Barcelona how the daily facial beard hair removal method is spreading due to the benefits that we will see later.

For the time that it has been used, it can be said that the method is something newer with which we can work and less popular, although the truth is that in recent years in Barcelona its growth has been very important.

The product that is used is applied to the area that we want to depilate, it is left to act 5 minutes after having applied it and thanks to a chemical reaction the hair dissolves in this way. Although we have to bear in mind that it is not like wax and its root is not uprooted.

Advantages of this type of method

It is not painful or does not produce the effects that the razor can have and is used somewhat more in a comprehensive treatment.

As with other treatments such as blades, this is not permanent for our service and in about 10 days after having applied it, the hair returns to its size and we have to start over.

For the time that this type of method lasts, it is a very expensive option since a container and the frequency of its use make it less recommended than other techniques used today. For some skins it must be taken into account that it can be aggressive.

It is a method that may be recommended for an emergency, but difficult for it to be the option you need for comprehensive beauty and care.

This method can be seen as the most conventional for waxing, but it has also been a technique closely associated with women for many years but was widely used in fields such as sports. Before of course it is laser hair removal.

With this type of hair removal such as wax, we remove the hair from the roots (which is more beneficial) and this already favors and it will take longer to grow much longer, making it weaker and with loss of pain in the process.

Advantages you can find in wax

Where and for whom to use the wax?

It can be recommended for very blonde or gray hair in each case where the laser cannot capture melanin immediately and is not as effective or for skin very tanned by the sun or with coloration (you should always consult an expert in each case) of very high skin in photo types VI.

Undoubtedly, both due to the increase that we can see in Barcelona, the hair removal method being clearly the last decade. With their prices in the last 10 years they have made it accessible, since there is no comparison in terms of results. This type of service was exclusive to a few in 2008, but today we can help you solve all your problems with hair, for very little;).

Of all the proposals and services that you can find in the male market, it is our choice, since due to its effectiveness, pain and versatility, it has no comparison with other services.

In beards that look very dense it can be painful for some men and being a hormonal zone with hair growth with different patterns it may not be equally effective.

If you are thinking of an effective method, the laser is your choice.

You can ask without obligation if we have any offer or promo for the type of hair removal you need in our center in Barcelona, we will help you.

Why is male aesthetics still relevant?

Every time you do a male facial, a chick dies
GDPR Cookie Consent with Real Cookie Banner